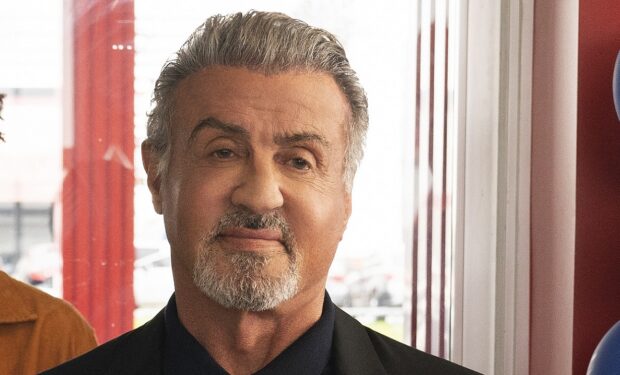 Hollywood movie star Sylvester Stallone is known for many roles he’s played over the years but Rocky Balboa is his most iconic. Nearly 50 years after the 1976 release, and people (and their dogs!) still dress up like the underdog boxer in grey sweatpants for Halloween.

When Sly visits the City of Brotherly Love, Philadelphia — where he filmed the legendary film Rocky — Philly fans get excited. When the 76-year-old Oscar nominee brings his three gorgeous daughters, they get “excited AF.”

When Stallone shared the photo above with his gorgeous daughters Sistine, Sophia, and Scarlet (his wife Jennifer Flavin is missing from the photo), he wrote: “Back in Philadelphia shooting promos with our daughters for Tiger Eye canned coffee available … Keep punching.”

One fan replied to the photo: “I’d be scared and excited af at the same time, to be your son-in-law.”

Note: that’s Stallone’s wife, Jennifer Flavin Stallone, mother of his three girls, on the far right in the photo below.

Get ready to see more of Sly: he’s reprising his role as Barney Ross in The Expendables 4 (2023) and is starring in the new series Tulsa King, which premieres November 13 on Paramount+.

In Tulsa King, Stallone plays the protagonist, a “mafia capo” recently released from prison and exiled to Tulsa, Oklahoma, where “he builds a new criminal empire with a group of unlikely characters.”