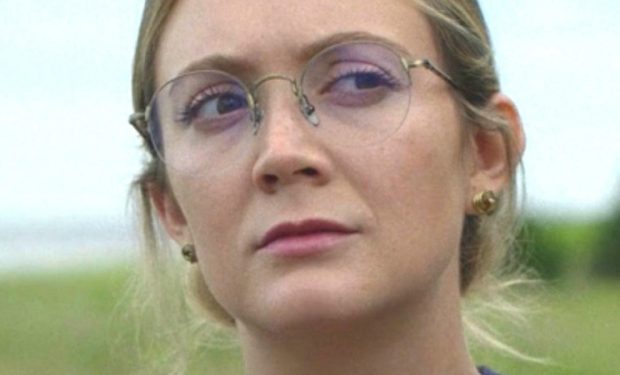 When Lourd shared the BTS video below, she wrote: “had to bless you all with this appetizing ✨BTS vid✨of yours truly vomiting up a surprisingly delicious banana smoothie of sorts.”

Lourd jokes about all the “vomit acting” she’s done on the show, so much so that she’s going to add it as skill on her resume. Finally, Lourd thanked her fans for “supporting my bizarre instagram presence.”

Get ready to see more of Lourd: she will appear next on the big screen in the comedy And Mrs with Colin Hanks (son of two-time Oscar Award winner Tom Hanks).

The movie is about a bride (Lourd) who insists on going through with her wedding after her reluctant fiance drops dead. Based on the And Mrs set photos above, one scene requires Lourd to dress up in a hot dog costume. Let’s hope she’s not required to vomit for the film.

Fun fact: Carrie Fisher and Tom Hanks starred in the 1989 comedy The ‘Burbs together: they played a suburban couple, a husband and wife who grow suspicious of their neighbors.