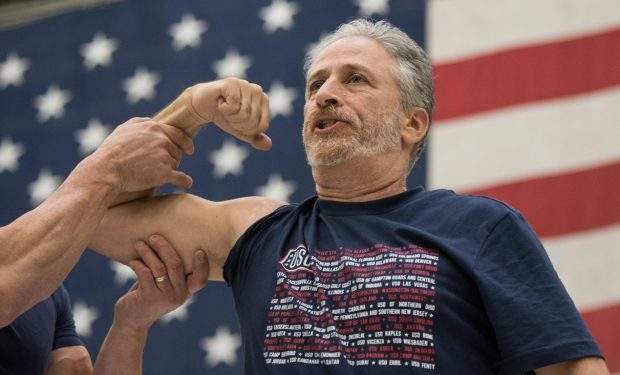 Jon Stewart, photo: Chairman of the Joint Chiefs of Staff, CC BY 2.0, via Wikimedia Commons

Comedian and social commentator Jon Stewart, who became famous skewering hypocrisy as the host of The Daily Show, is still at it. His new Apple TV+ show, The Problem With John Stewart, mines the same unendingly rich vein of WTF.

At 60, as Stewart’s beard and hair turn silver and his outrage acquires a senior sort of gravitas, some people are after Stewart to do more than just critique the political system he so effortlessly elucidates — they want him to run for office and fix it.

Among those champions of Stewart’s undeclared political future is fellow comedian Sarah Silverman, who shared a TikTok clip of Stewart’s plainspoken explanation of the fundamentals of tax policy — followed by theatrical thunder and the stormy entrance of that dubiously egregious word: “socialism.”

Silverman forwarded the video with a caption from an account called Imposter_Edits which read: “Jon Stewart for president” and added “please” to be polite and as a way of imploring. A comedian for president?

The story of Volodymyr Zelensky and Ukraine make the case that it’s possible for a comedian to take on the job, even to become an effective wartime president. Communications skills are a giant factor in job success for any politician, and practiced performers like Stewart and Zelensky are ready-made for the campaign trail and beyond.

Earlier this year, an opinion piece at Politico suggested Stewart would be the ideal foil for an imagined Tucker Carlson run for president. Stewart and the Fox News firebrand famously butted heads back when Carlson still wore a bow tie. But Stewart said “no thank you” to the proposal that he run.

Of course back then the Jon Stewart for President suggestion came from a political writer, not one of his own — a true comedian. Sarah Silverman, after all, did share a post that said please.