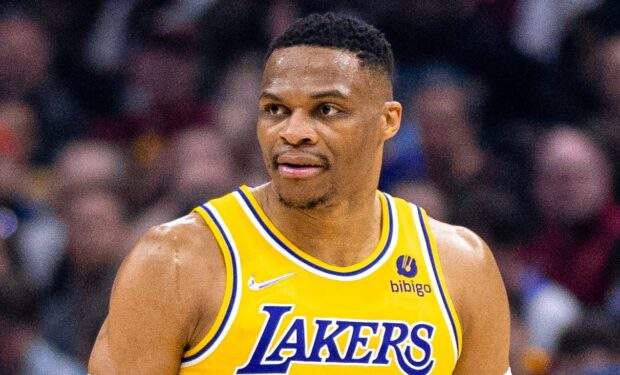 Russell Westbook is one of three current Los Angeles Lakers — with Anthony Davis and LeBron James — who are members of the elite NBA Top 75 Best Players of All-Time club. And for many a night during his illustrious career, Westbrook looked as if he could make the Top 25 club, too.

Last night was one of those nights, and it spun Lakers fans heads around. Westbrook scored 26 points on astounding 9-of-14 shooting, scoring 26 points in 29 minutes and heard chants from the Lakers crowd of MVP! But the 2-6 Lakers lost 130-116 anyway to a surprisingly good Jazz team, because: no defense.

Yet despite the loss Westbrook’s surge, because of his prominence and reputation, captivated viewers at least as much as Lauri Markkanen‘s 27 points for Utah.

Westbrook, who has been battling slumps and doubt (public and private), evidently felt free to be Russ on the court for a night — and so he played like himself. And when Westbrook plays freely he is a contender to be the best player on the Lakers on any given night, even with James and Davis.

The main problem? It’s been discussed ad nauseum, but Westbook’s chemistry with his teammates has stolen some of his freedom, which in turn sapped his confidence, creating a vicious cycle. His new role coming off the bench as sixth man seems to be helping a bit.

But what if — as Lakers fans must come to grips with — Westbrook, not James (through which currently everything must run first) is the team’s best player? (Not historically, of course — James is in a class by himself. But right now?)

Could it be that Westbrook at 33 is potentially more potent than James at 37? (It is notable that Davis played one of his best offensive games alongside Westbrook’s energetic effort.)

Westbrook said afterwards that he will continue to “just play basketball with a competitive fire and spirit and let my energy kind of be contagious.” Those MVP chants will help, no doubt.

But now there is a new Lakers puzzle to consider for head coach Darvin Ham and the fans: How would it be if the Lakers let Westbrook run the team and had James play second banana for two weeks? As an experiment? Could they be doing worse?

It doesn’t matter, of course, unless the Lakers can get things solved on the defensive end. Coach Ham obviously wasn’t pleased with the poor and porous effort, saying the Lakers “took a huge step backward tonight.”

Wow, going backward from the rotten spot where they were is hard to conceive, but he is right. 130 points, the Jazz total, is hardly ever what the losing team scores. Maybe the Lakers need to change just about everything? Ham could start with Westbrook leading the team.