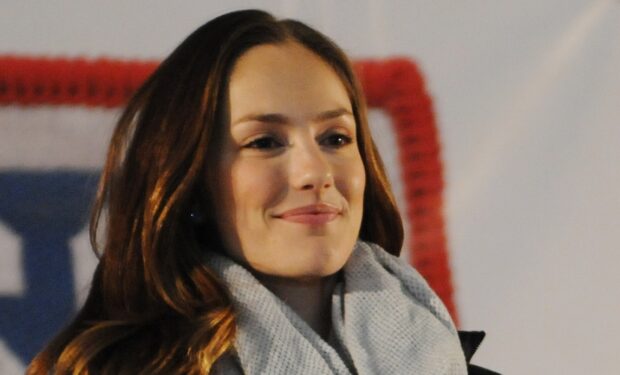 Actress Minka Kelly is known for her roles on Friday Night Lights (Lyla Garrity), Euphoria (Samantha), and in movies including The Butler (Jacqueline Kennedy), among others.

Get ready to see more of her: the Los Angeles native will appear next on the big screen in the psychological thriller Blackwater Lane, which is based on the novel The Breakdown by New York Times bestselling author B.A. Paris.

In Blackwater Lane, Kelly plays Cass, a woman who drives by a stranded motorist late at night in the pouring rain but doesn’t stop to help. When Cass learns that the woman in the broken down car was murdered later that evening, Cass carries a “terrible nagging guilt” and “after a series of terrifying events” she believes she’s being watched and is the killer’s next victim.

Producer Elizabeth Fowler said the “adrenaline fueled” movie “is an intelligent female driven thriller set in the British countryside with lots of layers and a very modern twist.”

And when not on a movie set, Kelly has been writing her memoir, Tell Me Everything, which will be released in May 2023. Kelly says it’s a tribute to her mother and all working class single moms who were “dealt a bad hand.”

Kelly is the only child of former Aerosmith guitarist Rick Dufay (below) and the late Maureen Dumont Kelly (above). Minka was raised by her mother, who died in 2008, at age 51, from colon cancer.

And when not promoting her new book, Kelly is spending time with the lead singer of Imagine Dragons, Dan Reynolds.