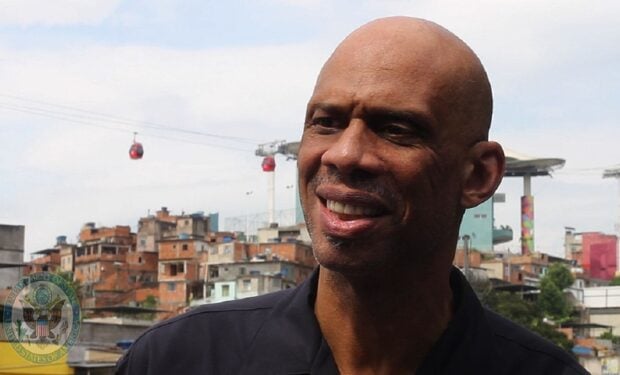 In the NBA universe, where a battle always rages — mostly for fun — between old school and new school players and styles, there is a stark contrast this week on social media between one of the new school superstars, Kyrie Irving, and the sports most accomplished senior statesman, Kareem Abdul-Jabbar, winner of six NBA titles and six NBA MVP Awards.

Irving is under fire for sharing a link to content allegedly filled with anti-Semitic tropes with his nearly 30 million followers on social media. The Brooklyn Nets guard has been lambasted by the likes of Shaquille O’Neal, Charles Barkley, and even Nets owner and Alibaba founder Joe Tsai for the promotion of such material.

While it is just a coincidence given the timing of Irving, Abdul-Jabbar’s social media activity strikes a stark contrast with Irving’s. Abdul-Jabbar’s most recent social media post (seen below) shows him promoting a talk he subsequently gave at the Simon Weisenthal Center, named after the Holocaust survivor who became a world famous Nazi hunter.

The Weisenthal Center describes itself as a “human rights organization confronting anti-Semitism, hate and terrorism, standing with Israel & defending the safety of Jews worldwide.” The content that Irving promoted (purposely unnamed here) could be described as the opposite of that.

Abdul-Jabbar was the keynote speaker on October 25 at the center’s Spirit of Hope 2022 conference. And for all those debating old school NBA vs. new school NBA this week, there can be little doubt about who is the rightful and righteous winner of Kyrie Irving vs. Kareem Abdul-Jabbar.