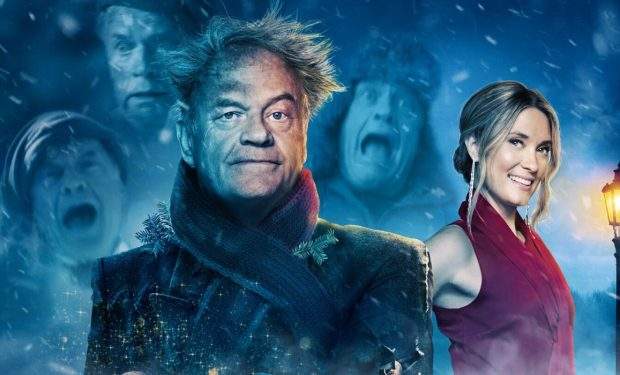 Hollywood star Kelsey Grammer (Cheers, Frasier, The Expendables) stars in the new Lifetime ‘It’s a Wonderful Christmas’ movie, The 12 Days of Christmas Eve. He plays a grumpy executive who “learns the meaning of Christmas” after suffering an accident. Part of his rehabilitation is to experience Christmas Eve over and over again (a la Groundhog Day) until he gets it right.

Grammer co-star is his real-life daughter, singer/actress Spencer Grammer. (Her mother is Doreen Alderman, Kelsey Grammer’s first wife.) As an actress, Spencer Grammer is best known for her role as Casey Cartwright in the TV series Greek. She’s also known as a voice-over artist: she provides the voice of Summer Smith on Cartoon Network’s Adult Swim, among others.

When the 39-year-old mom, Spencer, shared the stunning hot pink string bikini photos above, she wrote quoted: “They say a real actor uses a prop to emphasize the intent of the word on the page.” And then quoted Shakespeare’s Hamlet (Act 3, Scene 2): “Suit the action to the word, the word to the action.”

Fun fact: When Spencer gave birth to her son, Emmett, in 2011, Kelsey Grammer became a grandfather.

The 12 Days of Christmas Eve premieres on Lifetime on Saturday, November 26 at 8 pm ET.