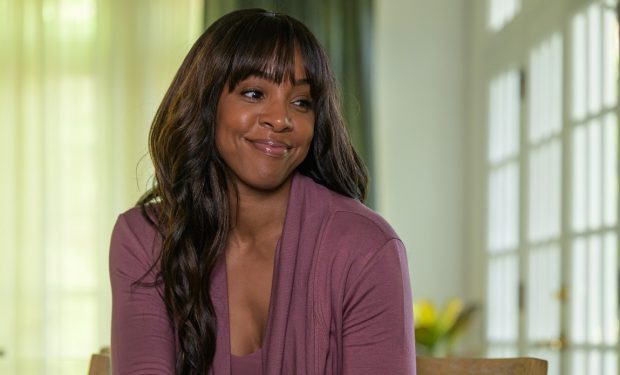 Singer Kelly Rowland is best known for being part of the best-selling girl group Destiny’s Child with Beyoncé and Michelle Williams. Since then the Atlanta native has released four solo studio albums, and launched her career as an actress.

For her tenth movie, Fantasy Football, Rowland plays Keisha Coleman, the wife of Bobby Coleman, an aging professional football player in the NFL (Omari Hardwick, Power, Being Mary Jane). Bobby is a stumbling RB on the Atlanta Falcons.

As seen in the trailer below, the couple’s daughter (black-ish star Marsai Martin, who executive produces the film with NBA legend LeBron James) discovers a way to jumpstart her father’s career by playing the NFL Madden video game.

Another fan wasn’t holding his breath: “Lol Hollywood stories are so fun and creative….falcons to the super bowl….glad this film is filled with childlike optimism.”

Whether the fictional Falcons make it to be the game or not, one thing is for sure, Rowland looks amazing in that NFL Atlanta Falcons cropped varsity jacket and denim and leather ‘Harley’ pants.