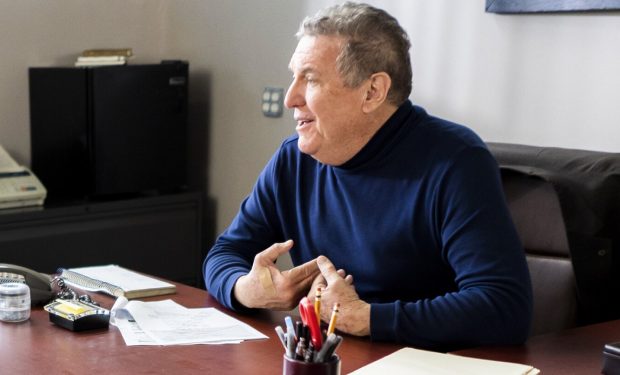 In the East New York episode ‘When Dinosaurs Roamed the Earth,’ while ENY Officers Bentley (Lavel Schley) and Quinlan (Olivia Luccardi) grow closer, a retired cop who was planning to go public with claims of corruption dies and it’s initially ruled suicide.

Deputy Inspector Haywood (Amanda Warren) isn’t buying the cause of death and directs her team to investigate. As seen in the sneak peek video above, Haywood tells the 7-4 to “treat it like a murder.”

Detectives Tommy Killian (Kevin Rankin) and Crystal Morales (Elizabeth Rodriguez) are put on the case and meet with one of the victim’s former co-workers, Kurt Walsh.

The native New Yorker is known for his roles as tough guys in movies including Dumb and Dumber (Joe Mentalino) with Jim Carrey and Jeff Daniels, Goodfellas with Robert De Niro and Ray Liotta (Frenchy), and The Natural (Boone) with Robert Redford, among many others.

Get ready to see more of Starr: he’s set to appear next on the big screen in the sports drama Sweetwater, about Nat “Sweetwater” Clifton (played by Everett Osborne, below), the first African-American basketball player to land a contract with the NBA (in the 1950s).

Starr plays Ukrainian-born basketball coach Eddie Gottlieb, the first coach and manager of the Philadelphia Warriors who later became the owner of the team. Fun fact: the NBA Rookie of the Year award is named after Gottlieb.

Sweetwater will be released in theaters on April 14, 2023.