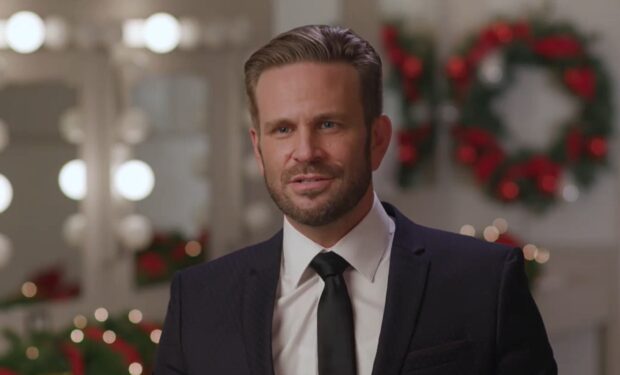 The protagonist of the new Hallmark Channel movie Lights, Camera, Christmas! is Kerry (Kimberly Sustad). When a movie crew moves into her small town to film a holiday rom-com, she steps in as a costume designer. While working on the set, she not only rediscovers her passion for design but she also falls for the leading man, Brad Braxton aka “The King of Christmas Movies” (John Brotherton).

In a Hallmark Channel promotional interview, Brotherton says everyone will fall in love with the movie because it’s “a slice of comfort pie.”

Brotherton is known for his role as “the kissing veterinarian,” Dr. Matt Harmon in the Netflix series, the Full House reboot Fuller House with John Stamos and the late great Bob Saget.

As seen in the scene below, Brotherton oozes with charm as Brad.

When his co-star Kimberly Sustad (who has also starred in The Nine Kittens of Christmas, Spotlight on Christmas and Christmas by Starlight) chimes in about how proud she is to be a Hallmark actress, and how impactful the movies are (“it gives me a purpose”), Braxton adds another food simile: “It’s just good ole’ fashion soul food.”