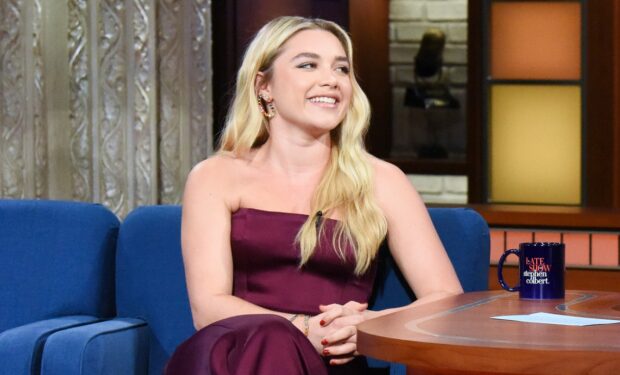 Pugh is set to play the protagonist, an eccentric hotel maid with an “obsessive love of cleaning and proper etiquette” named Molly. She “leaves every room perfect and pristine, while getting to know each guest’s dirty secrets.” The plot twists when Molly finds a wealthy guest dead in his bed and she becomes the prime suspect. (Pugh also produces.)

When author Prose shared the news about Pugh playing Molly, she wrote: “I can’t wait to see her with a feather duster!“

Pugh will appear next on the big screen in the upcoming film A Good Person, directed and written by her former boyfriend Zach Braff (Scrubs).

She plays the protagonist, Allison, “whose life falls apart following her involvement in a fatal accident.” She survives the tragedy and emerges from recovery “with an opioid addiction and unresolved grief.” Morgan Freeman and Molly Shannon co-star. A Good Person is scheduled for a March 24, 2023 release.

Get ready to see more of Pugh. The 26-year-old stars in the black-and-white biopic Oppenheimer with Cillian Murphy as the famous scientist. She plays Jean Tatlock, a graduate student at Stanford and member of the Communist Party when she started to date Oppenheimer (a professor at Berkeley) in 1936. Tatlock suffered from clinical depression and died by suicide in 1944. She was 29.

Robert Downey, Jr., Matt Damon, and Emily Blunt co-star, among others. Oppenheimer will be in theaters on July 21, 2023.