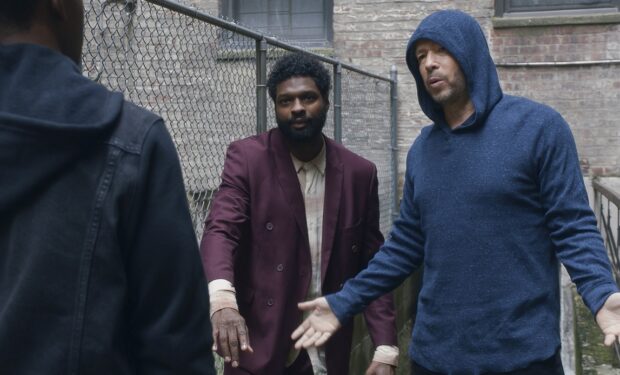 On the Blue Bloods episode ‘Homefront,’ while NYPD Commissioner Frank Reagan (Tom Selleck) launches an investigation after his family is harassed and Eddie (Vanessa Ray) lands in hot water after she defies a direct order, Danny (Donnie Wahlberg) and Baez (Marisa Ramirez) form an unlikely partnership with an informant in order to prevent a murder. That informant is “Bugs” and he’s portrayed by comedian Derek Gaines.

Gaines captioned the on-set photo above: “The New Woody And Wesley,” a reference to the 1992 movie White Men Can’t Jump starring Woody Harrelson and Wesley Snipes.

A post shared by B.T. Huguley AKA The Most Elusive Man in Con Attendance (@marvelfanboy63)

When Gaines shared the news of his appearance on Blue Bloods he wrote: “Donnie Wahlberg and me fixing the streets yet again!!”

When not hanging out with Wahlberg, Gaines is killing it on Inside Amy Schumer in sketches including PRIVLÁGE (a cologne “made of white women’s tears”) — see above. Below is the sequel.