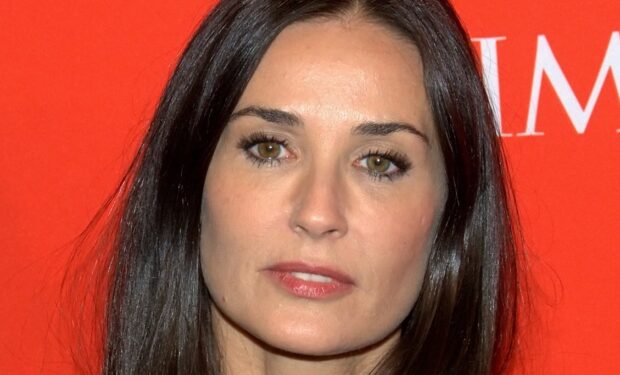 When Hollywood movie star Demi Moore (A Few Good Men, G.I. Jane, Ghost) turned 60, she celebrated her birthday with family and friends (including puppy Pilaf in a sling carrier) as seen in the video below, inside of a private plane.

Moore also presented herself with a gift. She bought “Darren the Donkey” from taxidermist Kady Rose. When Rose delivered Darren to Moore’s home (see below) she wrote: “From stillborn, to bad taxidermy, to the collection of Demi Moore! This little donkey has had quite the journey to say the least!”

Moore wrote: “A little gift to myself.”

Her daughter (with ex Bruce Willis), singer Scout LaRue Willis, replied: “She’s coming out of the closet as a lover of still born taxidermy !!!!!! What a way to start 60!!!”

As seen in the video above, Moore does her best Shrek accent (Mike Myers‘ Scottish accent) when she addresses the donkey as “Donkey.” Eddie Murphy played the character “Donkey” in the film.