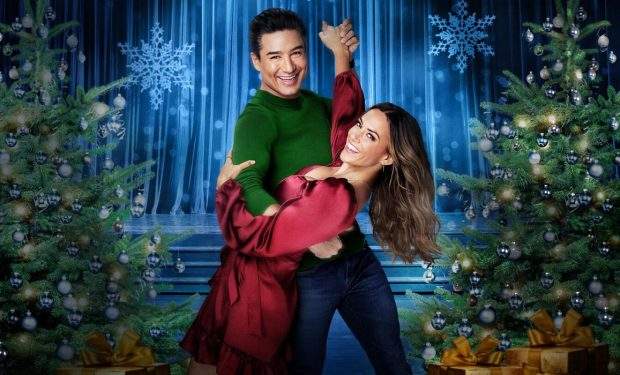 Lopez and Kramer in Steppin' Into the Holidays (Lifetime)

In the new Lifetime Christmas movie, Steppin’ Into the Holiday, Mario Lopez plays a former Broadway star who’s been fired from his hit TV show Celebrity Dance Off. When he goes home for the holidays, he meets the local dance teacher (singer/actress Jana Kramer). Together they work on her Christmas recital and sparks fly.

The best part of this movie is the appearance of Cheri Oteri, who plays the publicist of Mario Lopez’s character. As seen in the sneak peek video above, she is accompanied by the presence of her real-life lap dog, Adele. Oteri says it’s Adele’s big break in the biz and she’s using the hashtag #adelefortheemmy.

Oteri is known for her plethora of impersonations on Saturday Night Live including Barbara Walters (see above), her cheerleading skits with Will Farrell (below), and in films including Liar Liar (as Jim Carrey’s receptionist Jane) and Scream (weather forecaster Gail Hailstorm), among others.

Oteri shared the photo collage below on Adele’s 7th birthday in February.

Steppin’ Into the Holiday premieres on Friday, November 25 at 8 pm on Lifetime.