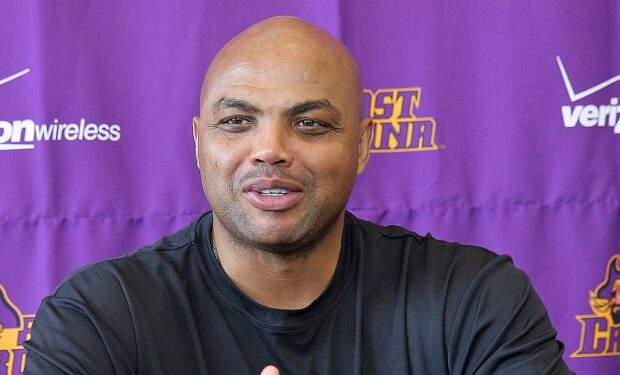 NBA legend Charles Barkley made a good living playing basketball, but he has made an even better one talking in the time since his basketball career ended. Cuddly, quotable, and not afraid to express his opinion, Barkley is the star of TNT’s NBA on TNT studio show, where he shares the stage with MC Ernie Johnson, Shaquille O’Neal and Kenny Smith, the latter two also former NBA stars, of course.

But it’s when Barkley does extracurricular media — The Steam Room podcast he does with Johnson, for example — that his filter, such as it is, comes off completely. And it was in that deliberately loose environment of The Steam Room that Barkley described a gross tattoo he wants to get on his behind.

Barkley wants to get two ‘M’s, one tattooed on each cheek. So far, so good. But then he goes on to describe the effect he’s after, saying when he’s right side up, the tattoo will spell MOM, and honor his mother. Then when he’s upside down, it’ll spell WOW.

Johnson takes the bait and asks how the two letters can make those three-letter words, and Barkley obliges the question by smiling and insinuating where the ‘O’ shape will come from.

For all the things Barkley has said in front of a microphone, this description of his sphincter serving as a letter of the alphabet — to honor his mother, no less! — is surely among the grossest. Barkley seems to enjoy it though, by the look on his face as Johnson laments his own position, saying “I had to go there, didn’t I?” The stunned Johnson admits: “I am dumbfounded.”

Fellow NBA brethren Chandler Parsons and Draymond Green reacted with laughing emojis, while one fan asks: “WFT did I just watch?” As usual, there is this comment: “Chuck is a national treasure.”