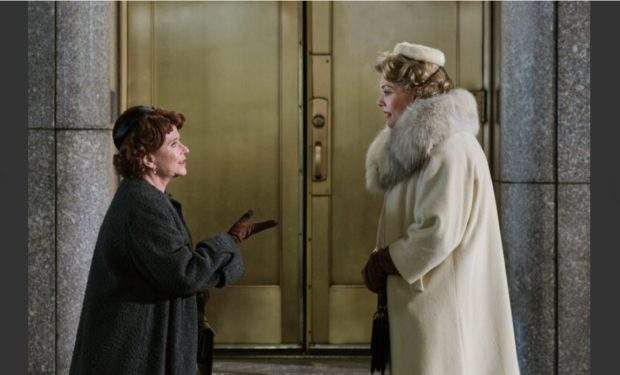 In the beginning of the Hallmark Channel ‘Countdown to Christmas’ movie A Holiday Spectacular we meet Grandma Maggie (Ann-Margret, Bye Bye Birdie, Viva Las Vegas, Tommy). She tells her granddaughter about the time she, as a young woman in the 1950s (Ginna Claire Mason), left her wealthy family to follow her dreams in New York City, where she became a Rockette and danced in the famous Christmas Spectacular at the legendary Radio City Music Hall.

Fans of 1970s TV sitcoms will recognize a familiar face. Actress Eve Plumb, who’s best known for her role as Jan Brady in the super popular family sitcom The Brady Bunch, has a supporting role, as seen above and below.

Eve Plumb’s fans are excited to see her back on TV and with a new look. As one fan replied: “I like the red hair on you!!”

Get ready to hear more from Plumb: she will provide the voice of one of the characters in the upcoming animated series Praise Petey. It’s about a New York City girl (Annie Murphy, Schitt’s Creek) “who has it all until her life comes crashing down around her.” Christine Baranski (The Good Wife) co-stars.

A Holiday Spectacular premieres on Hallmark Channel on Sunday, November 27 at 8 pm ET.