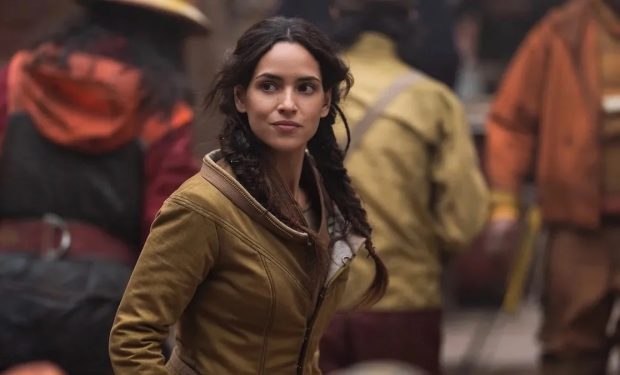 The protagonist of the Star Wars series Andor is Cassian Andor (Diego Luna). As revealed in the 90-minute premiere episode on ABC, ‘Kass; That Would Be Me,’ Andor’s “careless quest for answers about the past make him a wanted man.”

In the prequel series to Star Wars‘ Rogue One, Cassian embarks on the path that’s “destined to turn him into a Rebel hero.”

The character of Bix Caleen is portrayed by Adria Arjona. The Puerto-Rican born actress is also known for her roles in movies including the 2022 comedy Father of the Bride (the bride Sofia) and on TV series including the crime drama True Detective (as Emily), among others.

When not on a Hollywood set, Arjona often models. When the 30-year-old star shared the stunning photos above from a shoot with L’Officiel, Aquaman and Fast X star Jason Momoa replied: “Stunning!’ with a series of fire emojis.

Fun fact: Arjona stars in the upcoming movie Pussy Island, which Zoë Kravitz (Momoa’s stepdaughter) is directing. It’s about a cocktail waitress in LA who’s invited to a tech mogul’s (Channing Tatum) private island, which turns out to be terrifying.

Andor makes its premiere on ABC on Wednesday, November 23 at 9 pm.