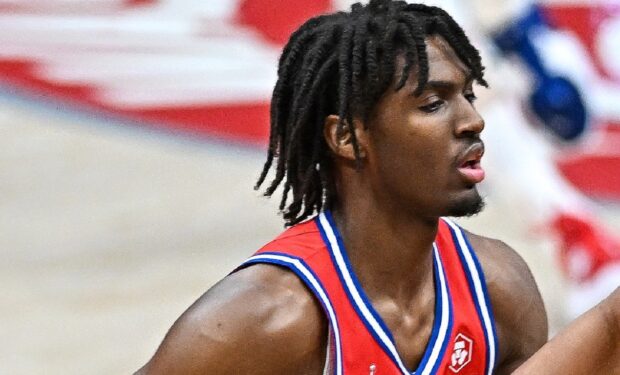 On Halloween night against the Philadelphia 76ers, Washington Wizards star Bradley Beal wasn’t quite as scary as he usually is. That is, for Beal, tallying a mere 20 points in 38 minutes (a strong performance for most NBA players) is sort of a mediocre night.

That’s obviously no knock on Beal — just the opposite. An elite NBA star who averaged 30+ ppg in two of the last three NBA seasons, Beal has set his own standard near the top of the heap.

But looking across the court on Thanksgiving the 29-year-old Beal could be forgiven if he thought he saw a ghost. The Ghost of Halloween Future, maybe? Because 21-year-old Tyrese Maxey was busy lighting up the Wizards for 28 points in the Sixers 118-111 Halloween victory.

Interestingly, Maxey, at 6’2″ just an inch shy of Beal, did his damage with the same kind of inside-outside-anywhere-I-want moves that Beal himself — a preternaturally gifted scorer — often performs. (Note: Beal added 6 assists and 5 boards, numbers Maxey didn’t reach.)

The 76ers and Wizards play in Philadelphia tonight at 7:30 ET. If you are looking to see two players who can score in a multitude of ways, the Beal-Maxey matchup is for you. Available on NBA League Pass.