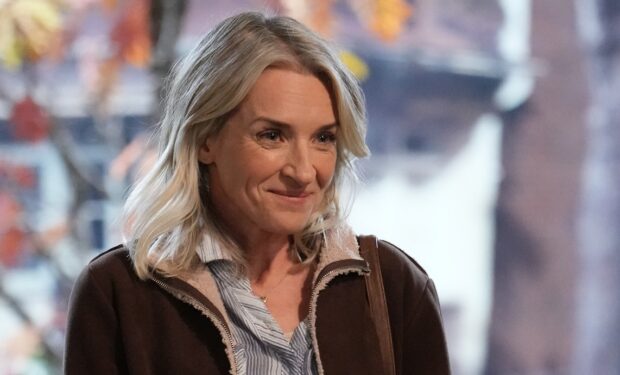 Ever Carradine on The Conners (ABC/Eric McCandless)

On The Conners Halloween episode ‘Book Bans and Guillotine Hands,’ Darlene (Sara Gilbert) and her daughter Harris (Emma Kenney) receive a visit. The woman at the door, who’s come to talk about the issue of book banning, is portrayed by Ever Carradine. As seen below, Harris is reading the often banned book, The Scarlet Letter.

Carradine, daughter of Robert Carradine (Revenge of the Nerds), is known for her role as Naomi Putnam on The Handmaid’s Tale, the hulu series about a woman who’s “forced to live as a concubine under a fundamentalist theocratic dictatorship” in Gilead.

When Carradine shared The Conners on-set photos below, she wrote: “Escaped Gilead to Langford.“