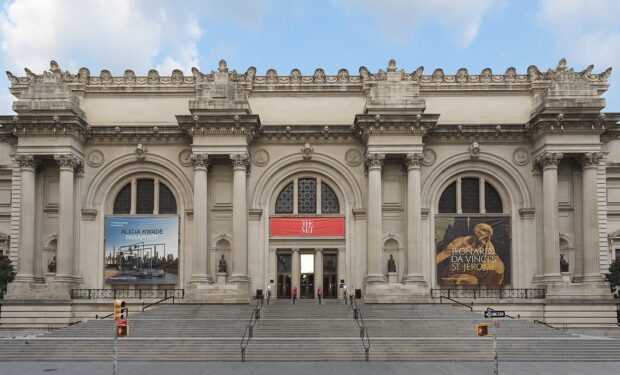 In 1946, Syracuse electrician and devoted baseball card collector Jefferson R. Burdick (1900-1963) approached the Metropolitan Museum of Art‘s new curator of prints and photographs, A. Hyatt Mayor, about his vast collection. Mayor was intrigued, and in 1947 Burdick “began to donate in large batches his entire collection of more than 30,000 baseball cards—along with another 303,000 trade cards, postcards, and posters—to The Met.”

More than a hundred of those vintage baseball cards are now on view at The Met in the exhibition Baseball Cards from the Collection of Jefferson R. Burdick. (Note: Outside of this particular exhibition, The Met regularly shows selections from the Burdick collection in small batches in the rear of the Americana section of the museum.)

The cards, produced between 1909 and 1953, “illustrate the history of baseball from the dead-ball era, at the turn of the nineteenth century, through the golden age and modern era of the sport.”

The Burdick collection of baseball cards owned by the Met is the most comprehensive public collection outside of the Baseball Hall of Fame in Cooperstown, New York.

The curator Mayor — who early understood the powerful place that commercial and pop art would come to occupy in the larger art world — added similar ephemera to the museum’s prints and photographs including wine labels, mail-order catalogues, “and one of the world’s finest collections of cigarette insert-cards.”

The visionary Mayor (who retired from the Met in 1966 and died in 1980 at the age of 78) is the grandfather of actress Yeardley Smith, the voice of Lisa Simpson on the long-running animated series The Simpsons. The actress’s appreciation for the genre comes naturally — it runs in the family.

Mr. Mayor once curated a show of comic strips at the Met and said that the idealistic purpose of all his endeavors is “to bring art to as many people as you can.”

Whether visitors of the museum come “to keep up the Joneses or to get out of the rain doesn’t matter,” he said. “They may be hooked by suddenly seeing something that really talks to them. It doesn’t matter why they come in.”

Baseball Cards from the Collection of Jefferson R. Burdick is on view at The Met until October 25, 2022.