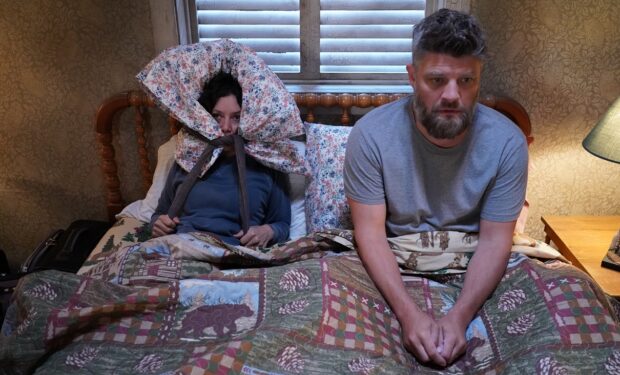 On the Season 5 premiere of The Conners, ‘Double Honeymoon and Seeing Double,’ in an effort to save money, newlyweds Darlene (Sara Gilbert) and Ben (Jay R. Ferguson), and Jackie (Laurie Metcalf) and Neville (Nat Faxon) head off on their joint honeymoon.

As seen in the photo and video below, their cost-saving measures backfire as the cabin they’re sharing has an open living floor plan model.

Without doors to separate the “bedrooms,” Darlene and Jay spend their honeymoon listening to the bed squeaking below.

Meanwhile, the rest of the family heads off for a night at a waterpark. At the hotel, Darlene’s kids, Harris (Emma Kenney) and Mark (Ames McNamara) “bond in an unexpected way as Mark copes with the news that his ex-boyfriend is dating someone else.”

The Conners airs Wednesdays at 8 pm on ABC, right before The Goldbergs at 8:30 pm.