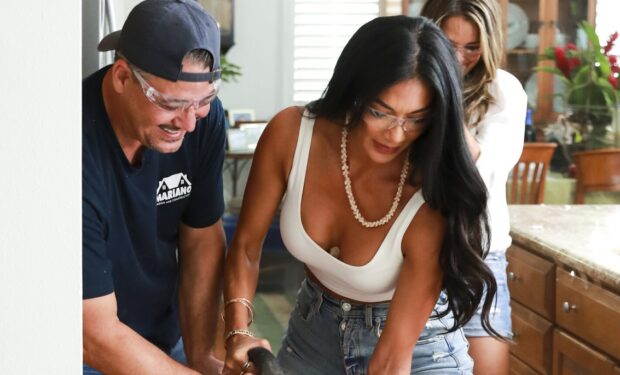 On Season 2 of the CBS reality home improvement series Secret Celebrity Renovation, former Pussycat Dolls singer and The Masked Singer star Nicole Scherzinger returns to Hawaii to give her grandparents — her Tutu and Papa — a home transformation that will make the house more spacious.

As seen in the photos above and below, Nicole takes off her duster, leaving her in a white crop top, to drop a sledgehammer on the kitchen counter and to jackhammer the tile floor.

In the video above, Rob says Nicole “went right to town” on the floor and “by the way the tiles were popping up, it was like she was parting the Red Sea.” When asked if she liked using the power too, Nicole replied: “I liked it a little too much.”