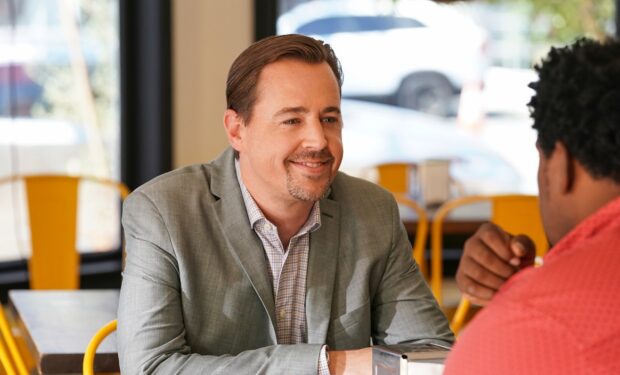 On Season 20 of NCIS, in the episode ‘Daddy Issues,’ Special Agent Timothy McGee’s (Sean Murray) personal life and professional life intersect when a dad from his children’s school is linked to a break-in at a government storage bunker.

As seen in the sneak peek video above, McGee’s first encounter with the fellow school dad makes him late for work and annoyed. When he apologizes to his co-workers for his tardiness, he explains, “I got held hostage by a chatty school dad.”

As seen in the photo above, McGee tries to engage in “small talk” about sports with the other school dads.

That sexy dad Owen is portrayed by Days of Our Lives: Beyond Salem star Peter Porte (as seen above with Lisa Rinna).

NCIS airs Mondays at 9 pm on CBS, right before NCIS: Hawaii at 10 pm.