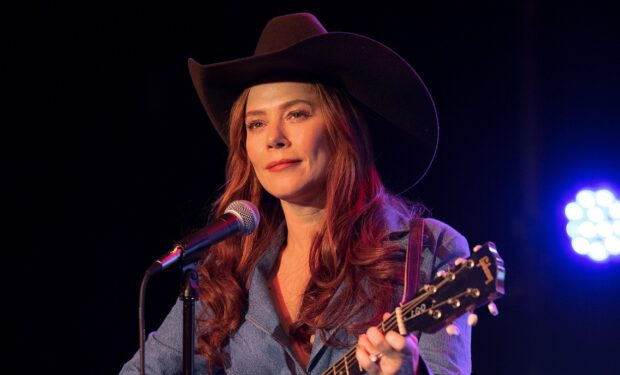 FOX is rolling out its new music business series Monarch. Similar to FOX’s former hit series Empire, it shines a light on one super powerful family who has built a legacy on lies. This time, the family (the Romans) is based in Texas and are country singers.

Susan Sarandon plays the matriarch (Dottie Cantrell Roman) and real-life country singer Trace Adkins plays the patriarch Albie Roman. Their daughter, Nicky, is the heir to the crown, and she is portrayed by Anna Friel.

As seen in the video above, the English-born actress Anna Friel really does sing on the show. (She launched her acting career on the British soap opera Brookside in 1995). Listen to hear talk about the first hit song, American Cowgirl. It includes the lyric, “Red lips, blue jeans, white pearls, I’m an American Cowgirl.”

In a sexy denim catsuit, Friel talk about the experience of singing for Monarch: “I was able to reconnect with my musical side and create a bunch of country songs guaranteed to make you wiggle, along with many many more to come from a very talented cast.”

Monarch premieres on Sunday, September 11 at 8 pm on FOX immediately following the FOX NFL doubleheader. It then makes its time period premiere Tuesday, Sept. 20 at 9 pm.