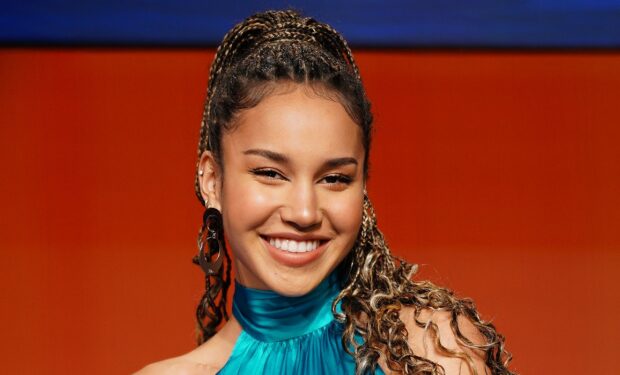 On Season 8 of Celebrity Family Feud, host Steve Harvey welcomes the casts of two teen TV series, High School Musical: The Musical: The Series and Netflix’s Never Have I Ever.

When not on TV, Wylie (who plays Gina on High School Musical) often models as seen in the stunning white hot bodice ensemble above by design house ALTUZARRA. Sofia captioned the photo: “hot summer nights.”

It’s from the label’s Spring Summer 2022 Collection, which is described as “a celebration of women’s bodies and the myths and mysteries associated with it.” As seen in the video below, the crochet is crafted by hand and spliced-knit onto bodices of jackets, dress and tops.

Get ready to see more of Wylie: she stars in the upcoming Netflix movie The School for Good and Evil with Charlize Theron and Kerry Washington, among others (to be release in October). Trailer below.