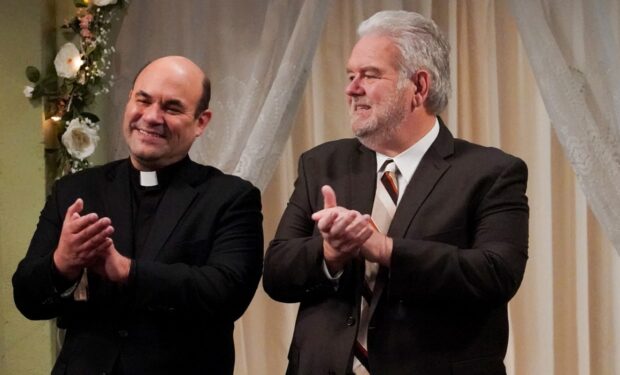 On The Conners episode ‘A Judge and a Priest Walking Into a Living Room,’ the Conners get ready for the family’s triple wedding event. Patriarch Dan Conner (John Goodman) gets the house all gussied up for the big day. As the title suggests, both a judge and a priest attend.

The priest is portrayed by Ian Gomez. He’s known for his TV roles on The Morning Show (Greg), Cougar Town (Andy; see video above), The Drew Carey Show (Larry), Felicity (Javier; see clip below), and in the movie franchise My Big Fat Greek Wedding (Mike), among many others.

The judge is portrayed by Jim O’Heir. He’s best known for his role as Jerry on Parks and Recreation.

The Conners airs Wednesdays at 9 pm on ABC, right after The Wonder Years at 8:30 pm, and The Goldbergs at 8 pm.