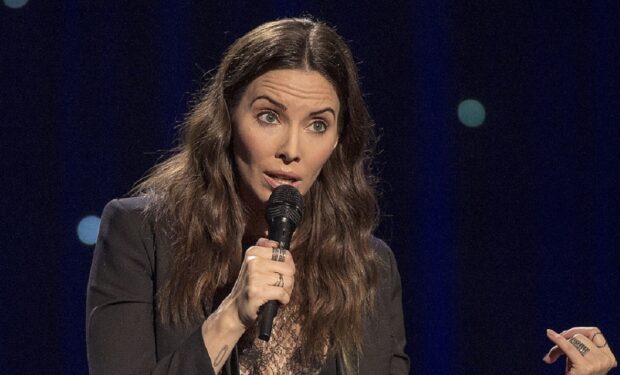 Comedian-writer-producer-star Whitney Cummings had plans to send the invoice for her diamond nose piercing to comedian Bert Kreischer — that is, before Kreischer walked the gem responsibility down to a more affordable “cubic zirconia.”

Cummings was playing the dare game with her podcast audience. They chose piercing, and she hit it on the nose…or you might say she came through. (Not literally, though she does mention coming below.)

Cummings also appeared to call out Alex Cooper, recently profiled in the MSM for wanting to be number one, and aiming for Joe Rogan’s throne. (In the podcast world, the competition is fierce.)

Cummings shouts out: “Hey, Call Your Daddy, did you pierce your nose live?” Cooper’s popular show is titled Call Her Daddy. The Cummings crew imagines aloud how Cooper might answer: by piercing a part a little more private.

Cummings recently told the New York Post that she is a natural trigger machine, triggering especially men who want her to fail but can’t stop watching her. Without even knowing it, the poor saps have been indoctrinated as “radical feminists,” she claims with glee.

Pretty good powers of stealth persuasion for Cummings, who always brings the funny.