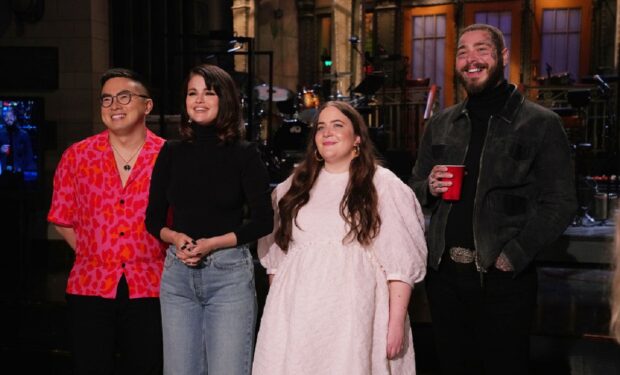 Selena Gomez isn’t worried, just excited she insists. And she has no “ants in her pants” either — despite being informed that the SNL stars Bowen Yang and Aidy Bryant stole her pants, put jelly in them, and left them outside for three days. Oh yeah, and then Post Malone “dumped [his] ant farm” on her pants.

Maybe that didn’t really happen? Selena is the definition of cool in this little SNL teaser, where Post Malone is firing up the charm on 12 cylinders.

Saturday Night Live is rocking two musical guests, but it’s a variety show — and every performer is hyphenated (singer-actress-producer-director-etc.) these days anyway. Selena reminds the crowd she’s also an actress and Post Malone balks at being categorized as a pop star. Technically, she’s the host and he’s the musical guest. But we’ll see!

Still, it’s double star power for the SNL May 14 show. Even Selena thinks the appearance is a milestone, saying “Mom…I think I’ve made it.”