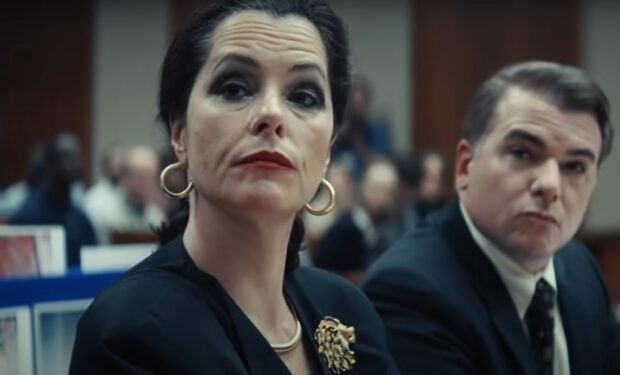 Parker Posey as Freda Black in The Staircase (HBOMax)

Hollywood movie star Parker Posey is known for her roles in Christopher Guest films including Waiting for Guffman (Libby Mae), Best in Show (Meg), A Mighty Wind (Sissy), and in Basquiat (Mary Boone), The Daytrippers (Jo), Clockwatchers (Margaret), and Dazed and Confused (Darla), among many others.

Get ready to see more of Parker Posey: she stars in the upcoming HBO Max series The Staircase.

It tells the story of crime novelist Michael Peterson (Colin Firth) who was accused of killing his wife Kathleen (Toni Collette), who was found dead at the bottom of the staircase in their Durham, North Carolina home in December 2001.

Black delivered memorable arguments during the trial (video below), which ended with Peterson’s conviction on first-degree murder.

Above is the real Freda Black in action; below is Parker Posey as the ADA.

In 2017, Peterson was granted a new trial, submitted an Alford plea to a lesser charge of manslaughter, and was sentenced to time served and freed.

The Staircase premieres on HBO Max on Thursday, May 5.