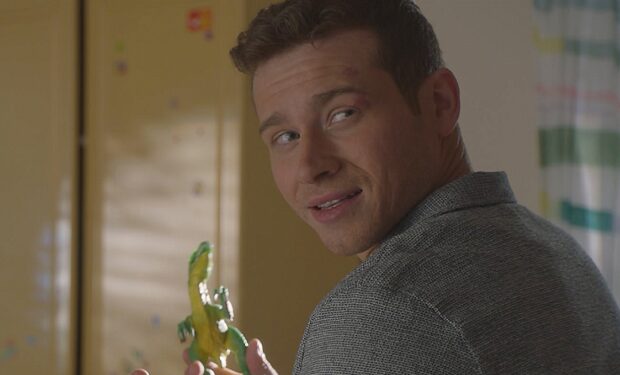 On the 9-1-1 episode “Hero Complex,” while Hen (Aisha Hines) and Chimney (Kenneth Choi) put their lives in danger when they suspect that someone is playing God to make themselves look like a hero, Buck (Oliver Stark) has a moment with a toy dinosaur (see photo above).

When not playing Buck on 9-1-1, the actor Oliver Stark spends time with animals. As seen below, Stark spent time at the Turtle Conservancy in Ojai, California.

When his 9-1-1 co-star Anirudh Pisharody (Ravi) applauded Stark’s work with animals, he replied “you look like that turtle with that shirt.” The comments has received hundreds of like. One fan replied to Pisharody’s acute observation: “now I can’t unsee it.”

Above are photos (and video!) of Stark with his dog, Jade, at home. Swipe to see Jade in action, and Oliver in slo-mo.