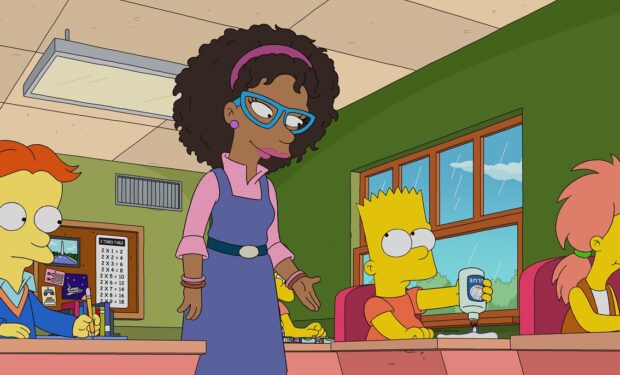 On the Season 33 episode of The Simpsons “My Octopus and a Teacher,” while Lisa befriends an octopus, her brother Bart can’t control his feelings when he gets a new fourth grade teacher, the bespectacled and “unfiltered” Ms. Rayshelle Peyton, who is voiced by Kerry Washington (Little Fires Everywhere, Scandal). It’s a recurring role for Ms. Washington.

Bart’s previous teacher, Mrs. Edna Krabappel, was voiced by the late, great Marcia Wallace (The Bob Newhart Show), who passed away in 2013. The character of Mrs. Krabappel was retired “after a fond farewell during season 25.”

It’s not the first time Marcia Wallace played a teacher. As seen in the clip below, she played Marcia’s teacher, Ms. Robbins, on The Brady Bunch.

When not providing the voice of Bart’s new “unfiltered” schoolteacher for The Simpsons, Kerry Washington enjoys the great outdoors as seen in the stunning bikini pics below, taken on Earth Day, two days before her debut on The Simpsons.

The Simpsons airs Sundays at 8 pm on FOX, right before The Great North at 8:30 pm and Bob’s Burgers at 9 pm.