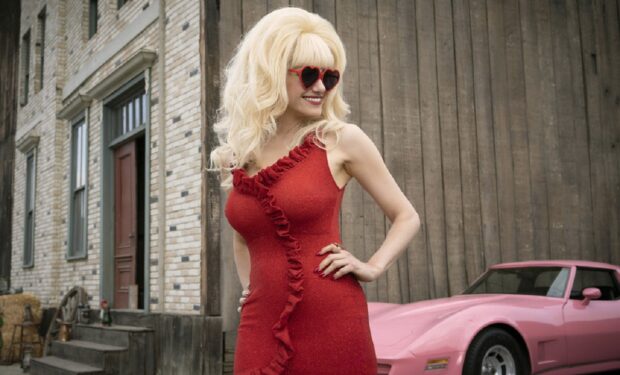 Shameless star Emmy Rossum is making cars crash into each other in Peacock’s Angelyne, the story of the first social media star who — since Instagram wasn’t born yet — took Los Angeles by storm on billboards.

Angelyne knew she was going “viral” as soon as cars started crashing into other cars, distracted by her outsize — and very successful — efforts to grab people’s attention.

“It’s working,” she coos, as a red BMW convertible dents its front fender, the driver’s eyes obviously blinded by the pink light of the wannabe star. Below is the newly released trailer for Angelyne, one of the Peacock’s early productions which is finally about to drop. (May 19, 2022)

Rossum shared a great peek (below) at her blonde buxom personification of Angelyne back in 2020, and it was delightfully shocking for her Shameless fans.

Rossum recently celebrated a very different hairstyle (and color) — “real curls,” she writes — in a chic and sophisticated look that subtly reveals just how big a transformation she had to perform to get into character for Angelyne.