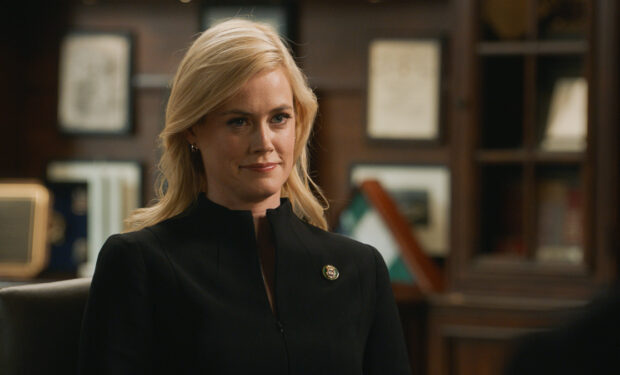 On the Blue Bloods episode ‘Long Lost,’ while ADA Erin Reagan (Bridget Moynahan, who directs the episode) looks into an alleged wrongful conviction, her father, NYPD Commissioner Frank Reagan (Tom Selleck), faces a dilemma. A Marine veteran, who became a local celebrity for saving a woman’s life, asks him to make an exception to the NYPD recruitment age limit so he can join the force. Frank asks his colleagues (including Abigail Baker) for their thoughts, see video below.

When not filming Blue Bloods, actress Abigail Hawk (who plays Baker) enjoys singing. When she shared the video below, of her singing Lady Gaga’s ‘Always Remember Us This Way‘ (from A Star Is Born), she explained it was made for her husband and to celebrate his birthday.

Hawk wrote: “It’s raw and impromptu and imperfect, but he sees me in these moments: my best, my worst, my ordinary, my real…and he loves it all.” Cute couple photos below.

They’ve been married for almost 13 years.

Blue Bloods airs Fridays at 10 pm on CBS, right after Magnum, PI at 9 pm and Undercover Boss at 8 pm.