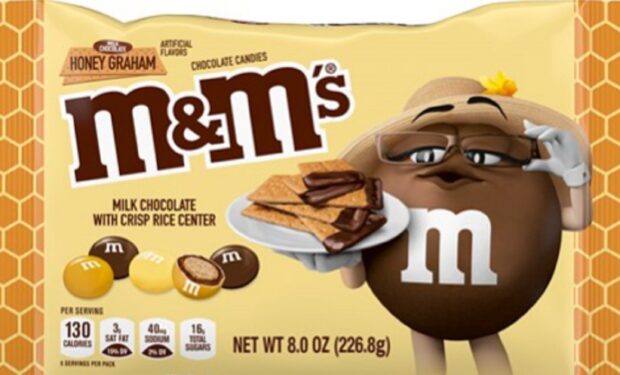 M&M’s knows what candy lovers want — and the sage candymakers knew these things long before the data revolution made consumer research a lot more plentiful. Candy lovers, for instance, want something that “melts in your mouth, not in your hand,” right? Check.

New this Spring from the busy minds of M&M’s innovators is a flavor called Honey Graham M&M’s, hitting shelves in time for Easter. And while the flavor is new, that honey graham touch also delivers that comfort food feel of the familiar. Because, really, what is more familiar than that unique flavor and crunch of the graham cracker? Go ahead, dip it in the milk.

But it wasn’t always so. It took a minister and the National Biscuit Company to make the familiar so familiar.

Graham flour is a coarse-grained flour of whole wheat named after Sylvester Graham, born in 1794. Wikipedia describes him as “an American Presbyterian minister and dietary reformer known for his emphasis on vegetarianism, the temperance movement, and eating whole-grain bread.” That last emphasis was the impetus for the wheat which carries his name.

Ironically, Graham believed in minimizing pleasure of all kinds, something neither graham crackers or M&M’s are good at! And Graham didn’t actually invent the graham cracker either. (That came later, when Nabisco started baking them at the end of the 19th century.) In all likelihood, Graham would have considered the honey and cinnamon that commonly flavor graham crackers today a sinful indulgence.

And there you have one thing M&M’s and Minister Graham might agree on: these new Honey Graham M&M’s are sinfully good. Well, Graham may have left out the “good” part. Even the regular M&M’s.

M&M’s introduced the treat in early February, writing on its site that “M&M’s new Milk Chocolate Honey Graham Easter Candy is a perfect addition to all your Easter traditions. This new milk chocolate candy is made up of a crisp honey graham cracker center and coated in a colorful candy shell.”

Minster Graham would doubtless have thought the bright candy colors were an indulgence too, and only eaten the brown ones.