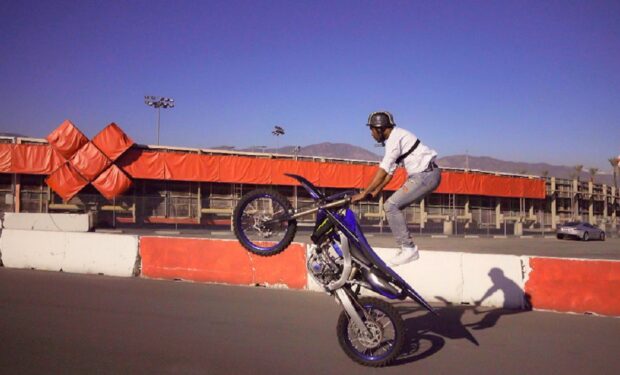 In the two-hour premiere of America’s Got Talent: Extreme, daredevil contestants vie for a chance to win a $500,000 prize and the title of “AGT: Extreme” champion. The new series promises to showcase “the most outrageous, unique and jaw-dropping acts of enormous scale and magnitude that simply can’t be confined to a theater stage.”

One of the first contestants to audition is Leeky Da Bikestar from Jamaica, Queens, New York. As seen in the photos above, Leeky flaunts his skills balancing on his dirt bike motorcycle.

When Leeky announced to his fans and fellow ‘street dirt bikers‘ that he’s going to be on AGT Extreme, he wrote: “I TOOK THIS SPORT OF OURS THEY CALL ILLEGAL TO NATIONAL T.V.” and added “WATCH THIS MONDAY HOW I PUT ON FOR THE CULTURE THIS ONLY THE BEGINNING.”

America’s Got Talent: Extreme airs Mondays at 8 pm on NBC.