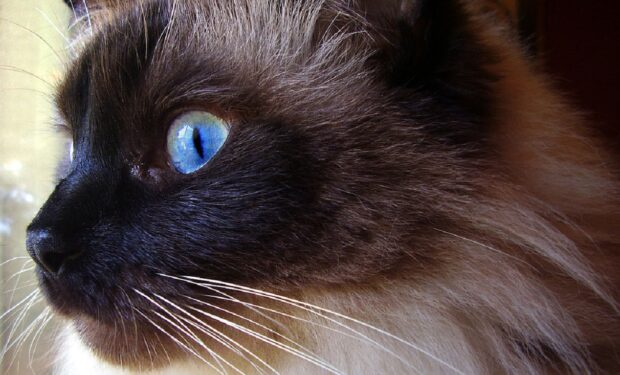 For the third straight year, the blue-eyed Ragdoll is the most popular cat breed based on registrations, according to the Cat Fanciers’ Association, Inc. (CFA). The Ragdoll is also a social media winner, like Jolene the Ragdoll seen below. Jolene is a good example of having what the CFA describes as “piercing blue eyes” of the Ragdoll breed.

The CFA, the world’s largest registry of pedigreed cats, has been tracking cat registrations since 1906. Registrations of all breeds have been rising, according the the organization, especially since the onset of the pandemic when domestic pet ownership surged.

There are 45 pedigreed cat breeds, according to the CFA, which also tracks non-pedigreed domestic cats through a separate registry called Companion Cat World, where the inclusive tagline is “all cats are fancy!”

Second to the blue-eyed Ragdoll on the 2021 pedigreed cat breed list announced this week is the popular Maine Coon Cat, described as “America’s home-grown treasure.”

Here is a pair of Maine Coon newcomers, looking ready to jump into first place on the list.

Rounding out the Top Ten cat breeds of 2021 are:

Many of the cats are relatively new to the breed list, with the Scottish Fold added in 1978 and the Devon Rex since 1983. But some, like the Abyssinian, which looks like cats found portrayed on ancient tombs, are foundational breeds, qualifying since the CFA began 117 years ago.