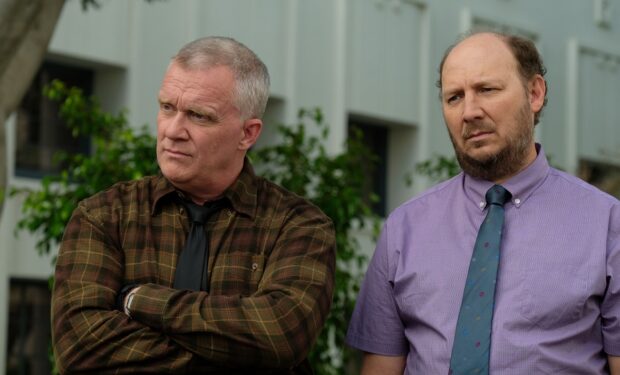 In The Goldbergs episode “Hip-Shaking, Booty-Quaking,” while Erica and Geoff throw a party to prove that they can still have fun as a young, engaged couple, Beverly takes over William Penn Academy as “acting principal” and stages a “Fame”-themed number for the senior class. Science teacher Mr. Woodburn (Dan Bakkedahl) does not look amused.

Remember: Mr. Woodburn is the one who gave Adam an F after he found out Beverly wrote Adam’s science paper, in the clip above!

Dan Bakkedahl is known for his roles on Veep (Roger Furlong — see clip above), Life in Pieces (Tim Hughes), American Crime Story (Judge Kenneth Starr — see clip below), The Mindy Project (Dr. Adrian Bergdahl), and in films including Trumbo (Roy Brewer), The Heat (Craig) and This Is 40 (Dentist), among many others.

Fun fact: Dan and Wendi McLendon-Covey star with Nina Dobrev in the upcoming film Sick Girl. They play the parents of Nina’s character! They finished filming at the end of 2019: no word yet on the release.

The Goldbergs airs Wednesdays at 8 pm on ABC.