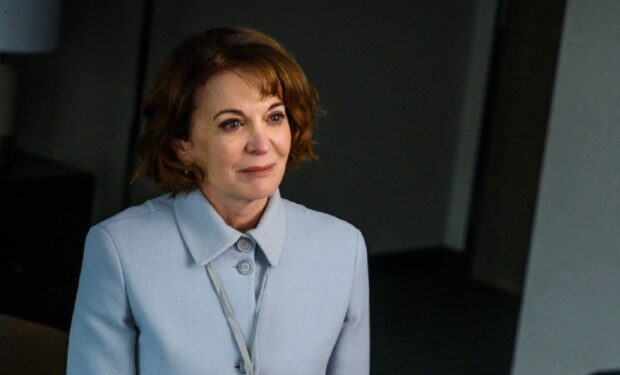 On the FBI episode “Grief,” while the team searches for an abducted college co-ed, Jubal (Jeremy Sisto) continues to grapple with the aftermath of Rina’s (Kathleen Munro) death. He learns of Rina’s death at the hospital in the scene below.

Rina’s parents took her off of live support. In the mid-season finale of FBI in December, Rina was shot by henchman of a drug cartel while standing next to Jubal.

In the clip below, the FBI Special Agent shows Rina’s mother Nicole to her daughter’s empty office and presents her with a box of Rina’s personal belongings. It’s a tense encounter. Watch the clip below.

Rina’s mother is portrayed by Kathleen Garrett, who should be nominated for an Emmy Award for Best Guest Actress for this scene. She delivers the lines: “It is a decision no parent should have to make. But her father and I knew that’s what she would have wanted so there was no point in delaying it.”

Kathleen is known for her roles on Power Book II: Ghost (Judge Nina Larkin — above), Billions (Maureen Ryder — below), Law & Order (Judge Susan Moretti), and The New WKRP in Cincinnati (Dana Burns) Dana Burns, among many others.

Get ready to see more of Kathleen: she plays Laura Bush in the upcoming series The First Lady with Viola Davis (Michelle Obama), Gillian Anderson (Eleanor Roosevelt), and Michelle Pfeiffer (Betty Ford), and in the Netflix series Inventing Anna, which premieres February 11, 2022. Watch trailer below.

FBI airs Tuesdays at 8 pm on CBS, right before FBI: International at 9 pm and FBI: Most Wanted at 10 pm.