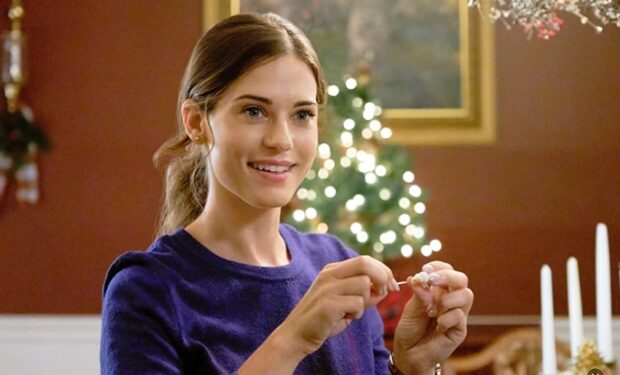 The protagonist in the Hallmark Channel movie Next Stop, Christmas is Angie. When she heads home for the holidays, she’s sold a train ticket by a magical conductor (Christopher Lloyd, Back to the Future). While napping on the train, Angie travels back in time… to ten years ago when she said no to her boyfriend who proposed marriage, and to the time when her parents were still married. Her mother Evelyn is portrayed by Lloyd’s Back to the Future co-star Lea Thompson.

Angie is portrayed by Lyndsy Fonseca.

She’s best known for her roles on Turner & Hooch (sister Laura Turner), Agent Carter (Angie Martinelli), Nikita (Alex), Desperate Housewives (Dylan Mayfair), Big Love (Donna), How I Met Your Mother (the daughter on the couch), The Young and the Restless (Colleen Carlton), and in movies including Kick-Ass 2 (Katie) and Hot Tub Time Machine (Jenny), among others.