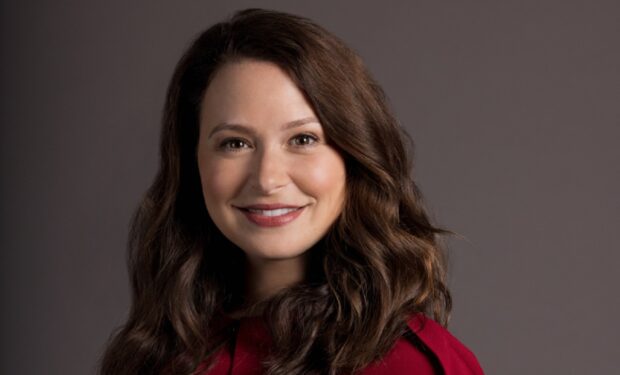 The protagonist in the new CBS holiday movie Christmas Takes Flight is single mom pilot, Captain Jenny Beckett (Katie Lowes). Her family-owned local airline, Sundance, is acquired by conglomerate CEO Matt Connor (Evan Williams) who is young and handsome but Scrooge-like with the corporate budget. When Matt cancels the company’s annual holiday charitable benefit for underserved children, Jenny rallies to save the event and falls in love with Matt, at the same time.

As Katie says in the preview below, “Ya gotta root for love.” (She also points out that only 1 in 7 pilots are female!)

Actress Katie Lowes who stars as Jenny is best known for her on-camera role as Quinn Perkins in the Shonda Rimes political drama Scandal with Kerrie Washington. She’s also known as a voice-over artist: she provides the voice of Candlehead in Wreck It Ralph, Badger Doctor in Zootopia, and Abigail in Big Hero 6, among others.

Get ready to see more of Katie: she will appear next in the upcoming Shonda Rimes series Inventing Anna on Netflix. It’s about a journalist who investigates the case of Anna Delvey (portrayed by Julia Garner, Ozark), a young woman in New York City who pretended to be a German heiress, endeared herself to the members of social scene, “and stole their money.”

In real life, Delvey was convicted of multiple counts of attempted grand larceny, larceny in the second degree, and theft of services. Anna Chlumsky (Veep, My Girl) plays the journalist Rachel. Inventing Anna premieres on February 11, 2022.