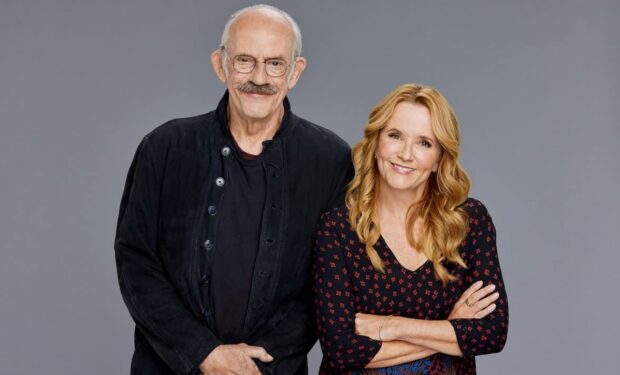 The protagonist of the Hallmark Channel movie Next Stop, Christmas is Angie Reynolds (Lyndsy Fonseca, Turner and Hooch, Agent Carter, How I Met Your Mother). She gets a second change at love when she takes a magical train ride home for the holidays. When she wakes from a nap, Angie discovers she has time traveled to the past… ten years in the past when she rejected her boyfriend’s wedding proposal and her parents where still married. Her mother, Evelyn, is portrayed by Hollywood movie star Lea Thompson (Back to the Future, Howard the Duck, Some Kind of Wonderful, Caroline in the City).

For the movie, Lea is reunited with her Back to the Future co-star Christopher Lloyd who plays the train conductor who sells Angie her time-travel ticket home. Watch trailer above.

Lea has had a long relationship with Hallmark Channel but admits that this movie was “a strange thing.” It’s her seventh movie with Christopher Lloyd but the two actors have said very little to each other in all seven films. Lea says: “We’ve worked together probably a total of two-and-a-half years without [having] any lines together!” At least while filming Next Stop, Christmas, Lea says “we did get to hang on this one and got some pictures together.” They also see each other at Comic Con events. Lea says of Chris: “I just love and adore him.”

When Lea posted the photo above she wrote: “in all 7 films we have never directly spoken to each other. Lol. Maybe next time.”