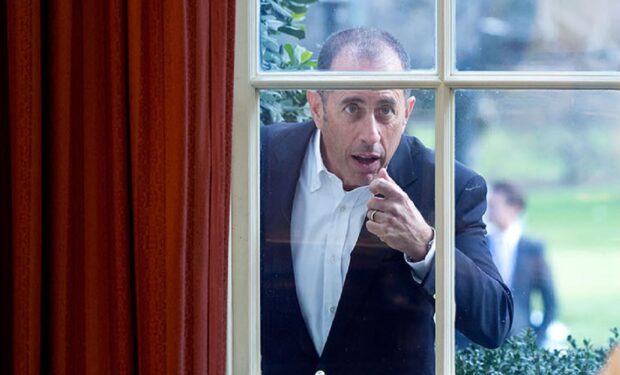 Comedian Jerry Seinfeld is married to Jessica Seinfeld, the New York Times bestselling author of cookbooks including Deceptively Delicious and Food Swings. Mrs. Seinfeld is promoting her latest best seller with videos of her at home cooking in her kitchen, using recipes from her new book Vegan, at Times: 120+ Recipes for Every Day or Every So Often book.

When Jessica, 50, shared the pizza video above, she wrote: “No cheese, no problem.”

More than one fan commented on the fact that she wears a white t-shirt and that it remains white at the end of the cooking video.

One replied: “Wearing a white shirt and handling tomato sauce.. my mother would faint.” She’s also not afraid to work with melted chocolate in a white shirt — see video below.

Other fans have voiced their requests to watch Jerry cook, too, or to at less eat the food Jessica has prepared. Alas, fans will have to make do with photos like the one below which Jessica captioned: “we made desserts together without killing each other.”