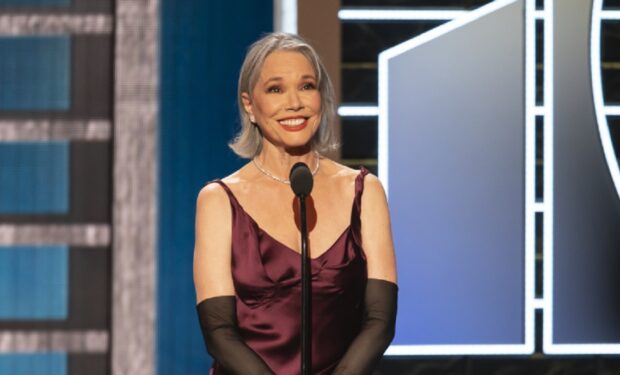 Several celebrities will walk the famous stage to share their love for the honorees. That includes actress Barbara Hershey, Bette’s co-star in the popular movie Beaches, which featured that famous song, “The Wind Beneath My Wings.”

For the televised event, Ms. Hershey turns heads in a gorgeous wine-colored satin dress with twisted straps and detail, with a pair of long sheer black gloves… and a beautiful grey shoulder-length bob.

Barbara Hershey is also known for her roles in films including The Last Temptation of Christ, The Portrait of a Lady, The Right Stuff, The Natural, Hannah and Her Sisters, Hoosiers, and Black Swan, among many others.

She most recently starred in The Manor, a supernatural horror film about a 70-year-old woman, a former professional dancer, who is moved into a nursing home after being diagnosed with Parkinson’s disease. See trailer below.