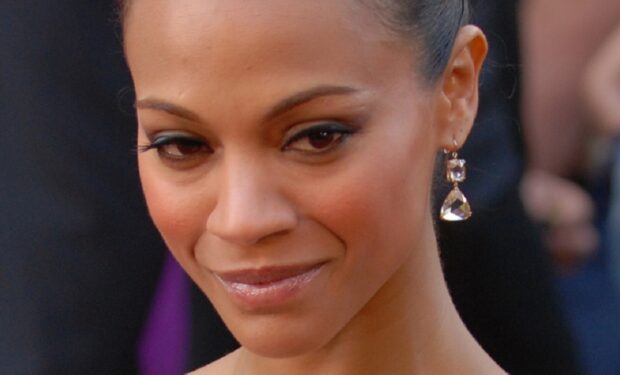 When not on a big Hollywood movie set, actress Zoe Saldana (Avatar, Guardians of the Galaxy, Star Trek) hangs out in her underwear and robe at home, just like the rest of us. In the selfie video below, while wearing a pretty Kit underwear set, she lip syncs Kayne West‘s song “Praise God” and sashays from the bathroom to another room with a full-length mirror and stubs her toe on the leg of a chair.

Zoe captioned the video: “Really tried to get on this one” and used the hashtag #bloopers. Her fans and famous friends love the video. Actress Selma Blair replied: “Ow!!!!”

Get ready to see more of Zoe: she’s reprising her role as Neytiri for James Cameron’s Avatar 2, which is scheduled for a December 16, 2022 release, and she’s filming the third, fourth and fifth installments!

She’s also filming the Marvel Studios sequel Guardians of the Galaxy, Vol. 3 which is scheduled for a May 5, 2023 release. When she recently posted the photo above, she captioned it: “Gang’s all here.” Zoe knows how to have fun on the set, as seen in the video montage below!