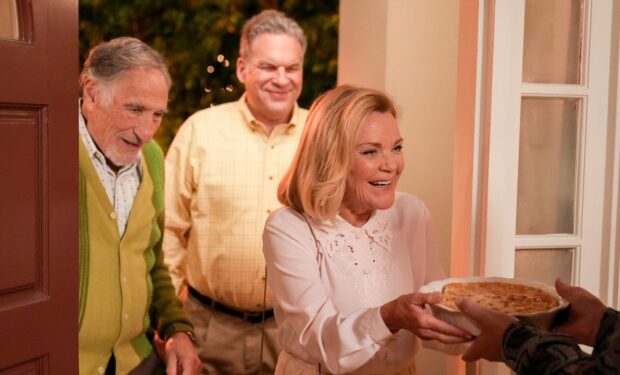 In The Goldbergs episode ‘A Light Thanksgiving Nosh,’ when Beverly (Wendi McLeanon-Covey, Bridesmaids) learns that Linda Schwartz (Mindy Sterling) will host Thanksgiving this year, she becomes concerned that her role as family hostess is threatened. Meanwhile, Pop-Pop (Judd Hirsch, Taxi, Ordinary People) surprises the family by showing up with a new lady friend who’s played by actress Stephanie Faracy.

Stephanie is known for her roles on Sneaky Pete (Dotti), How to Get Away with Murder (Ellen Freeman), Devious Maids (Frances), True Colors (Ellen Freeman), and in films including The Great Outdoors with the late great John Candy (his wife Connie Ripley — watch epic scene below), Blind Date with Bruce Willis and Kim Basinger (Susie Davis), and Heaven Can Wait with Warren Beatty (Corinne), among many others.

The Goldbergs airs Wednesdays at 8 pm on ABC, right before The Wonder Years at 8:30 pm, and The Conners at 9 pm.