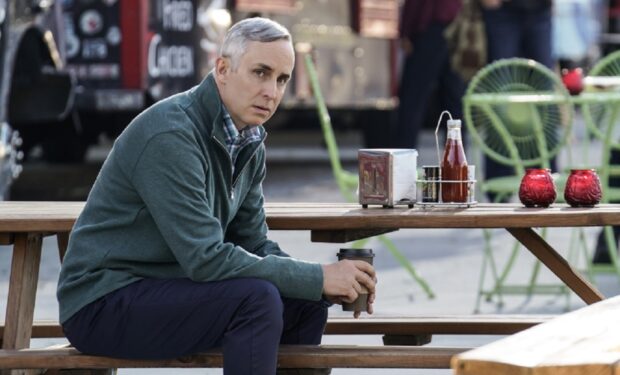 In the CSI: Vegas episode ‘In the Blood,’ when an abandoned horse covered in blood is discovered, the investigation leads the CSI team to a halfway house for convicted murderers. Meanwhile, Grissom (Williams Petersen) and Sara (Jorja Fox) begin to circle their prime suspect in the David Hodges case. David Hodges is their former colleague who’s been implicated in tampering with evidence. The quirky character appeared on CSI: Crime Scene Investigation from 2003 to 2015.

David Hodges is portrayed by actor Wallace Langham, who in a TV Guide interview in April 2007 described Hodges as a “pain in the ass” who “kisses up” to his superiors.

A post shared by all things csi vegas (@allthingscsivegas)

Wallace Langham is also known for his roles on Mom (Jerry), Veronica’s Closet with Kirstie Alley (Josh Blair), The Larry Sanders Show (Phil — watch hilarious clip below), and in films including The Social Network (Peter Thiel), Michael with John Travolta (Bruce Craddock), Soul Man (Barky Brewer), and Weird Science (Art), among many others.