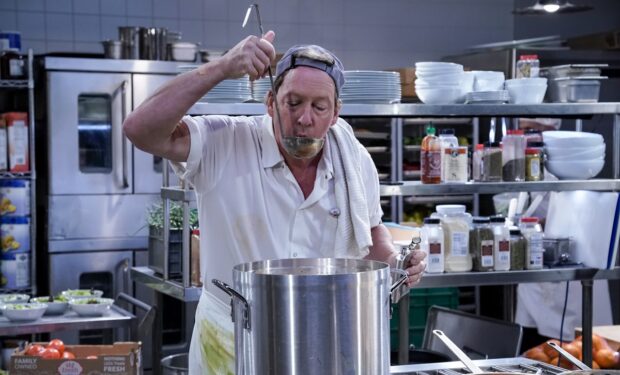 On the B Positive episode ‘A Dishwasher, a Fire and a Remote Control,’ while a frustrated Drew (Thomas Middleditch) blows up at one of his therapy patients, Gina (Annaleigh Ashford) is pressured by almost all of the seniors at Valley Hills to fire the chef, Bert. They all agree that “the food blows” and that it would be nice to have a chef who doesn’t start a fire in the kitchen every week. The problem is, Gina doesn’t like to fire people. As she attests: “I still go to my pediatrician.”

Chef Bert is portrayed by D.B. Sweeney. He’s known for his roles on Sharp Objects (Dad Keene), Major Crimes (FBI Special Agent Morris), Two and a Half Men (Larry), and in films including Chi-Raq (Mayor McCloud), Heist (Bernie), The Cutting Edge (Doug Dorsey), and Eight Men Out (Shoeless Joe Jackson), among many others.

Get ready to see more of D.B.: he’s set to film the horror movie Sarah with Virginia Madsen and Mary Stuart Masterson. It’s about a teen girl who harbors a dark satanic secret.