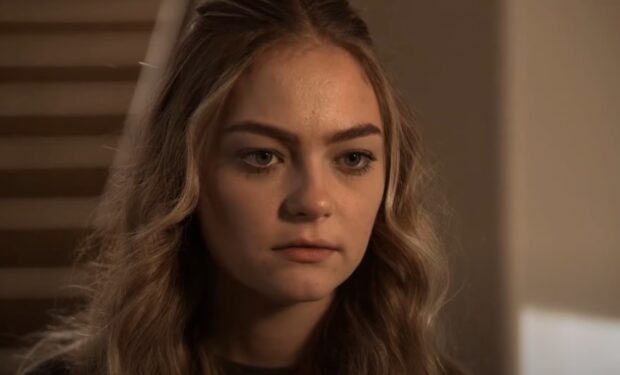 The protagonist of the Lifetime movie Sex, Lies and Murder (originally titled Deadly Seduction) is college professor Maggie Bogan (Lindsay Hartley). After told by her husband Richard (Brooks Ryan) that he’s having an affair with one of his students (he’s a professor, too), Maggie is encouraged to go on a girls’ night out with her best friend Alyssa (Reynada Robinson).

Maggie ends up having a passionate night with a handsome young man named Kyle (Andrew Philip Rogers), whom she meets at a bar. When Maggie shows up to work the next day, she’s shocked to see Kyle in her class, as a student. He’s a bad dude who has bad intentions for Maggie and her gorgeous teenage daughter Jenny.

The 21-year-old blond who plays Jenny is bikini model (see photos above and below) and TikTok star Katie Kelly aka girlwithgreenbeanie.

Get ready to see more of Katie: she’s starring in another thriller with Lindsay Hartley. The movie is called Prisoner of Love. It’s about an 18-year-old girl (Katie) who begins dating a charming older man who spoils her, creating a huge rift with her mother, whose instincts prove right when he becomes psychologically manipulative, turning the girl into an emotional prisoner in his mansion.