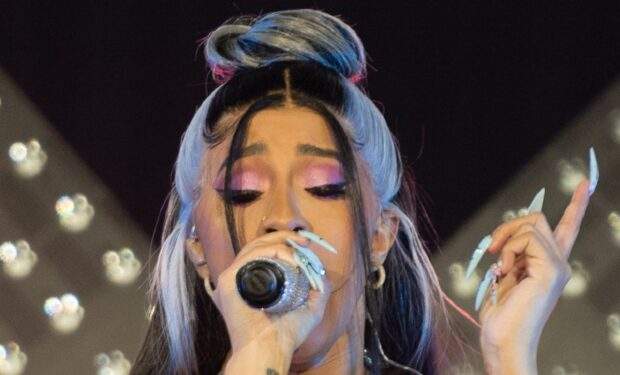 Cardi B on the mic, photo: Frank Schwichtenberg, CC BY-SA 4.0, via Wikimedia Commons

It’s safe to say that Elsa Shiaparelli, creator of the storied fashion house named for her (Maison Schiaparelli), didn’t anticipate Cardi B. But that’s only because NOBODY anticipated Cardi B — she’s a one of a kind star, driving in a lane she paved herself. And Schiaparelli (1890-1973) just couldn’t have known what the world was in for!

But today Cardi is the most famous body from which Schiaparelli couture hangs, and both the house and the star are winners in the match.

And it isn’t just the gowns either, as you can see. One fan responded to this Cardi-Shiaparelli look like this: “how you keep eating up all these looks! Slayage!” Slayage sounds like an upcoming music drop from the star.

But stick around Cardi’s feed for a minute and she’s on the move again. And you get her famous curves in Jean Paul Gaultier, an artist who probably did anticipate Cardi. The fashion “bad boy” lives on the razor’s edge of cultural aesthetics, and Cardi B has a vacation house on the same coastline!

Here’s JPG and Cardi, making like the sun itself.

As you can see, the dress — for all it’s detail — doesn’t look nearly as great as it does on its model!

So there’s Schiaparelli v. JPG and, really, there is no winner — or rather everybody wins. Hey, you need variety in life, especially if you’re Cardi B!