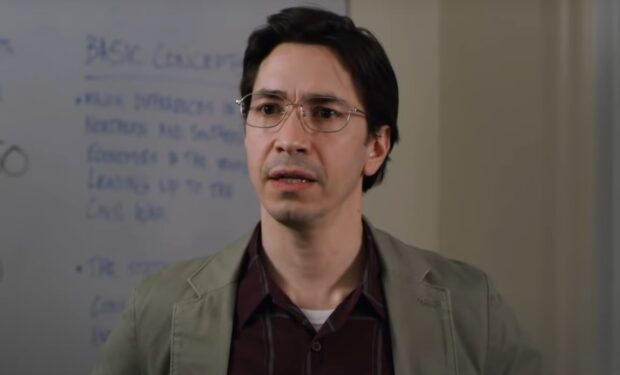 Justin Long in Lady of the Manor (Lionsgate trailer)

In the video below, actor Justin Long approaches Lea Thompson on a set. It’s an awkward scene as Justin does his best impersonation of Michael J. Fox in the legendary, iconic movie Back to the Future. Lea played the mother of Michael J. Fox’s character Marty. Justin captioned it: “As a HUGE #BackToTheFuture fan, I had to play it VERY cool when I got to work w the wonderful @lea_thompson – mission accomplished, I think!”

Justin made sure to thank Lea for being “such a good sport to indulge this bit (and my enthusiasm for you, in general :).” But he could not have anticipated from hearing from Fox directly. MJF replied to the video: “Justin, you nailed it. Your Marty is tops. Spade, Carvey, Fallon don’t come close. Happy happy.” That’s former SNLers David Spade, Dana Carvey and Jimmy Fallon.

Get ready to see more of Justin (as seen above). He’s promoting his new film Lady of the Manor starring Melanie Lynskey and Judy Greer. Watch hilarious trailer below.